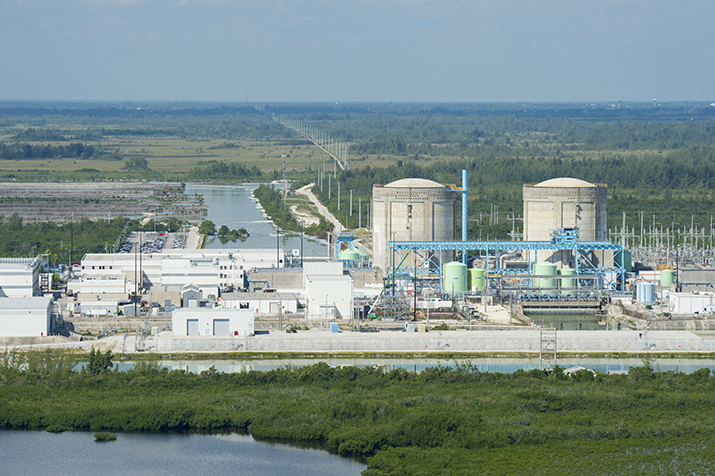 Our Commitment to Safety

The Turkey Point Nuclear Power Plant has an outstanding record of safe operations. It is designed to withstand earthquakes and other natural events stronger than ever recorded in the region. It is elevated 20 feet above sea level to protect against flooding and extreme storm surges. In 1992, the plant withstood the direct impact of Category 5 Hurricane Andrew with no damage to its nuclear systems. The site also added many redundant safety systems and equipment following the Fukushima incident.

In addition, many layers of security protect the plant. The Nuclear Regulatory Commission, federal and local law enforcement, as well as FPL’s own expert security team, are always on alert to ensure that plant facilities are protected and secure.

As part of our commitment to safety, we test our emergency response system signals regularly. Siren tests are conducted by local emergency management officials on the first Friday of March, June, September and December, at 1 p.m., and last two minutes or less.

This guide contains important emergency planning information for people located within 10 miles of the Turkey Point Nuclear Power Plant. It was developed by emergency management officials and provides basic information about what to do in the event of a nuclear emergency. This information is updated annually.

Planning is an important part of FPL’s strategy to protect you and your family. Turkey Point Nuclear Power Plant has a more than 40-year record of safe operations, but it makes sense to have a plan in the unlikely event of any emergency.

State and local officials, together with FPL, have prepared a detailed emergency plan to protect people who live, work, visit or go to school within 10 miles of the plant. The plan is tested by evaluated exercises and inspections. Conducting emergency drills improves the overall readiness of local authorities and enhances their ability to respond to emergencies.

If an emergency requires you to take any action, sirens will sound throughout the entire 10-mile emergency planning zone. Hearing a siren or receiving an emergency alert does not necessarily mean to evacuate the area.

How You Will be Notified

In the event of a serious emergency, public safety officials may use a variety of methods to notify people living within 10 miles of the plant, including:

Emergency management officials will provide instructions on what you are to do. Remember, hearing an outdoor warning siren does not necessarily mean evacuate. Siren tests are conducted by local emergency management officials on the first Friday of March, June, September and December. Sirens may also occasionally be triggered by maintenance, lightning or electrical storms.

There are four emergency classifications at nuclear power plants. Each calls for a certain level of response from plant and government personnel.

In the unlikely event of an emergency at Turkey Point Nuclear Power Plant, you may be instructed to shelter in place, which means you should immediately go indoors. If you are already inside, stay there. Often sheltering in place provides the best protection.

Check with your workplace to learn their plans for dealing with a hazardous materials emergency. Their shelter in place plans should include the following:

In the unlikely event of an emergency at the Turkey Point Nuclear Power Plant, you may be asked to evacuate your home. State and local governments have established strict guidelines to ensure your safety and will provide updates on the actions you should take through local radio and television stations.

In the unlikely event of an evacuation, public transportation will be provided by Miami-Dade Transit at the locations listed below:

If you are directed to evacuate, you will want to take your pets with you.  Plan now for what you will do and how you will protect them. Please keep in mind that pet owners are ultimately responsible for their pet’s needs at the public shelter.

If you have livestock

If you grow food products

For more information, contact your local agricultural extension agent and ask for the brochure titled, “Agriculture and Nuclear Power in Florida.”

These facilities will follow their emergency management plans, which include evacuation procedures.

Check with the facility in advance to verify its evacuation plan.

The uranium fuel inside the reactor is radioactive. It is securely contained and constantly monitored to protect public safety and health. The fuel is encased in ceramic pellets which are stacked end-to-end inside long metal tubes. The tubes are assembled into fuel bundles that are immersed in water in the reactor core. The core is housed inside a nine-inch thick pressure vessel. That vessel is inside a robust containment building made of steel-lined concrete.

Radiation is not new or mysterious – it is a natural part of our environment. Radiation is energy that is given off as a particle or wave and radioactive elements are naturally occurring in small amounts throughout our environment. In the United States, natural sources account for most of the radiation we are exposed to each year. Radiation also comes from medical tests such as X-rays, CT scans and nuclear medicine studies. Normal everyday items such as smoke detectors also emit small amounts of radiation. Less than one percent of the radiation to which people are exposed comes from nuclear power plants. 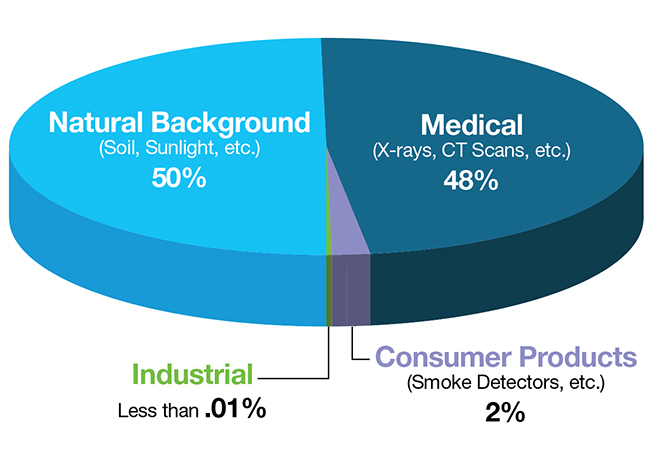 Radiation is measured in units called millirems. A millirem is a unit used to measure the amount of radiation a person receives. The graphic shows how much radiation we get from different sources. For radiation to cause any measurable biological effect in human beings, most scientists agree that the exposure must reach about 25,000 millirems in a single, short exposure.

Exposure to large amounts of radiation can be harmful to human health. However, given the nuclear industry’s strong commitment to safety, such exposures are extremely unlikely.

Numerous monitoring devices placed in and around the Turkey Point Nuclear Power Plant can detect even minute amounts of radiation. If radiation amounts increase above naturally occurring background levels, the monitoring equipment would alert plant operators, who would notify state and county officials.

Special protective actions are available to prevent exposure to radioactive iodine. Iodine is a major fission product which may be released during nuclear power plant accidents. Iodine is of particular interest because it tends to concentrate in the thyroid gland, just as iron concentrates in blood or calcium in bone.

Authorities are required to have potassium iodide (KI) readily available for residents within the 10-mile emergency planning zone around a nuclear power plant. These residents are considered most at risk, and initial distribution will be focused primarily on that mission. As more personnel and resources become available, KI may be available to others. It must be understood that use of a thyroid blocking pill is not an adequate substitute for prompt evacuation or sheltering by the general population near a plant in response to a severe accident.

Emergency plans are designed to protect you in the unlikely event of a nuclear station emergency. State and local government officials have established guidelines to protect people from radiation. These guidelines call for protective actions at levels far below those that could be harmful to your health. If state and local officials expect radiation levels to reach the established guidelines, the emergency alert system will be used to let you know how you can best protect yourself and your family.